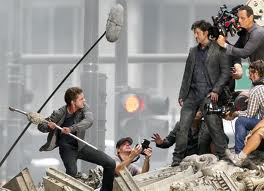 With the release of the latest teaser trailer for next year’s Transformers: Dark Of The Moon, many were upset that it didn’t show the chemistry between Shia LeBeouf and his new co-star Rosie Huntington-Whiteley. In fact, they don’t even feature in the trailer. Instead, we are given an interesting back-story surrounding the Apollo 11 landing in the alternate universe in which Transformers exist.

There has been lots of speculation as to how Huntington-Whiteley’s character can be introduced into the tale, after the very high profile sacking of fan favourite, Megan Fox, who was initially signed on to the film during principal photography.

The third instalment of the film franchise is set to be in 3D, making director Michael Bay adjust his filming techniques. Bay has acknowledged that this film will be more serious, after disappointing some fans with the last sequel.

“We tried to learn from the second movie. On the second movie we got burned. We had a writers strike, we had to agree on a story in three weeks, and then we knew they were going on strike… It was still an entertaining movie, but I think we failed on certain aspects. What we did with this movie is I think we have a much better script, and we got back to basics. … It’s more serious. I got rid of the dorky comedy; I mean we’ve got two little characters, that’s it, but the dorkiness is not there. Dork-free Transformers. It’s much more serious. It’s still entertaining; it’s big looking.”

Bay has also hinted that this would be the last Transformers film that he will direct and has suggested that LeBeouf is not interested in returning, making it all the more important for this final film to not only be a success in the box office, but also to be a success with the fans. Will you be watching Transformers: Dark Of The Moon? And what do you think about Megan Fox’s departure from the films?

Until three days ago I had never seen a film that had made me laugh, cry and want to vomit. Then I went to see Jackass 3D. I find it very difficult to be objective when reviewing this film because I have been a fan of Jackass since it was simply a television show when it started ten years ago. The ‘Jackass’ concept has since become a franchise with spin-off’s such as Bam Margera‘s ‘Viva La Bam’, Steve-O‘s ‘Don’t Try This At Home’ and Ryan Dunn‘s ‘Homewrecker’ .

For me, there is no debate that this is the best the Jackass boys have ever been. The initial opening scene of the film makes full use of the 3D technologies and you can’t help but feel like the paintballs flying out of the screen are going to cause you the pain that they are causing the men on-screen.

Fans will love this film because there are many references to stunts originally performed on the first series of the show, but with a much bigger production element. Johnny Knoxville, the ring-leader of the group, even goes as far as to say “I think it’s almost ten years to the day when we first did this stunt”. Another sentimental element of the film is the use of old photographs and clips of previous stunts over the end credits with the Weezer song “memories” which the Jackass cast feature on.

However, the film isn’t just for previous fans of the franchise, people who are completely unaware of the Jackass phenomenon would still be able to watch Jackass 3D as it is a stand-alone film. It is, however, rather difficult to review in the sense that it will either appeal to a viewer or not. But, personally, I would definitely recommend the film.