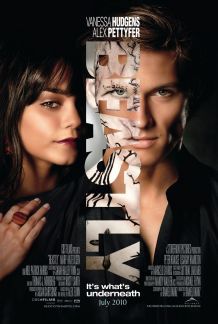 I’ll be the first to admit, I am an absolute sucker for fairy stories. Some of my fondest memories from growing up are sitting watching Disney films with my sisters. Between us, we probably have every Disney Classic VHS and to this day, I could probably still quote them word for word.

One of my favourite Disney films growing up was ‘Beauty and The Beast’. I couldn’t tell you exactly why, but I think I identified with the main character Belle; she’s very close with her father and has a love for literature, two qualities that I can identify with. The Disney version of the film heavily focused on her, which is any young girls dream, to be able to compare herself with a Disney Princess. I was therefore, initially very hesitant when I heard that the film was being remade in a modern day setting.

‘Beastly’ is set to be released in 2011 and the new trailer has just been released online. It will star Vanessa Hudgens of High School Musical fame and English actor Alex Pettyfer. I have to say, after seeing the trailer, I still have my reservations about what the response to the film will be, just because the Disney adaptation is so iconic to people of my age. The film appears to be more focused on Pettyfer’s character, which, for me, could save the film. From the trailer, he seems to be captivating and I’m sure will be a huge success, having already been attached to Now (2011) which stars Amanda Seyfried, Justin Timberlake and Cillian Murphy among many other big names.

Despite my reservations, I’m sure I’ll be checking this film out. What do you think of the trailer?

With the film not due to be released until March 2011, ‘Red Riding Hood’ is already causing a stir virally since the release of it’s teaser trailer. Gone are the traditional elements of the classic story: the young heroine of the story is now Amanda Seyfried, who is featured in some very steamy moments with co-star Shiloh Fernandez in the trailer alone, and the infamous ‘big bad wolf’ is now a werewolf.

Perhaps the most discussed element of the trailer though, is it’s similarity to 2008’s ‘Twilight’. Coincidently, both films were directed by Catherine Hardwicke. MTV have even gone as far as to compare screen-shots from the 90 second trailer and ‘Twilight’.

Sure some comparisons are obvious, a love triangle, murders and supernatural elements. Also, the idea of ‘star-crossed lovers’, which was definitely not featured in the traditional ‘Little Red Riding Hood’ tale. But how can we really judge just how similar the films are based on a 90 second trailer? That’s why I’ll retain my judgement until the film is released next year.

In the meantime, check out the trailer:

There was an error retrieving images from Instagram. An attempt will be remade in a few minutes.