Advertising agencies are now embracing social media to the full. Nowadays it is rare to see an ad without the familiar ‘hashtag’ (#) symbol in the corner, inviting viewers to discuss what they have seen on Twitter.

The latest viral ad to take the world by storm is Three’s #DancePonyDance, featuring Socks, the moon-walking Shetland pony. Created by Wieden and Kennedy, the ad sees Socks shimmying across the Scottish Highlands to Fleetwood Mac’s ‘Everywhere’. Watch the ad below:

As a brand, Three are trying to put more emphasis on their Ultrafast network and as a result are encouraging people to share the things that they enjoy via networking websites:

Three want to let the world know that all the seemingly stupid, funny and downright daft stuff we look at online on a daily basis…is not silly at all. Their point of view is that this stuff connects us to one another through the simple act of sharing it. Which is why as a network they do everything they can to help you live up to their brand line ‘Keep on internetting’. The commercial ends with the line ‘Silly stuff. It matters’.

The brand have even started a “Sharing Stuff” section on their website where they discuss the top online sharing habits of the week:

As well as encouraging viewers to discuss, and share, the ad campaign using the #DancePonyDance hashtag, a web-hosted app was also released to further inspire online sharing.

The remixing tool, The Pony Mixer, allows people to make their own customisations of the ad by adding different backgrounds and props as well as changing the music genre. Once the user has remixed the viral, it can be shared online again via social media. Some of these user-generated ads are now being televised alongside the creator’s twitter name. The @ThreeUK twitter feed even has a promoted post sending tweeters to The Pony Mixer, making it unavoidable to connect with the brand.

The ad has been so popular that numerous celebrities have now mentioned how much they love Socks and the first @ThreeUK tweet linking to the ad has now been retweeted 1,277 times. A parody account for Socks has also been created on twitter, @ponydanceparody.

Perhaps the biggest sign that the public are influenced by ads, and social media trends, is the fact that Fleetwood Mac’s ‘Everywhere’, the soundtrack of the ad, has now re-entered the UK charts. It will be interesting to see if the new songs featured on The Pony Mixer will follow suit. 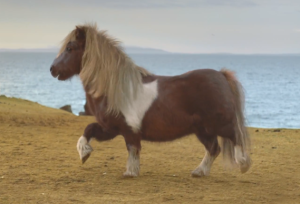 The ad has undoubtedly been a success for Three. Viewers are now linking their emotions towards the advert with the brand itself and the majority of tweets on the #DancePonyDance hashtag are positive.

However, there has of course been a surge of jokes relating to the recent horse meat scandal and now there is an unfortunate report of yobs forcing a Shetland pony to moonwalk off of a cliff. So it remains to be seen how long responses to the ad itself will remain positive.

Until then, I’m off to remix my own #danceponydance ad…

What are your thoughts on the ad? Love it or loathe it? Does it make you think of Three differently?

The websites for BBC News and Sky News are both aimed at the market sector ABC1 and are likely to be the first port of call for any informative news by people aged 14 and above. The BBC News website is currently the most popular news website in the UK, recording around 14million unique users each week. It is funded primarily through the television license. Whilst Sky News does not quite reach the same amount of hits a week, it is still a very popular source of information. This comparative analysis was one of my university assignments and has been edited for this website.

Searchability
When conducting a Google Search of “BBC”, a link to the BBC News site was the third suggested result, with other elements of the BBC Website the first two links. Similarly, when searching “Sky”, Sky News is the second search result, after the television site for the company. However, when simply searching “news” on Google, ‘BBC News’ and ‘Sky News’ are the first and second search results. Although, it is fair to say that a website’s popularity is not dependent on SEO.

Layout and Design
‘BBC News’ and ‘Sky News’ look professional and include a search bar at the top of the homepage for easily recovered content. Both websites favour the “three panel layout” proposed by Jeffrey Veen (2001). With only three general regions on the page, there is increased usability as the different regions are distinguishable; optimising the content on the page. This minimalistic and understandable design could be a reason for these websites success as it allows the website to maximise its full potential and purpose. 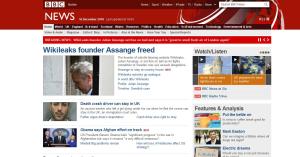 The navigation of the websites remain sophisticated due to the design. The BBC News website in particular makes great use of interactivity. Hyperlinks are underlined if the cursor hovers over them and the hyperlinks refer to other articles and websites where available. The navigation on the Sky News website doesn’t look quite as sophisticated as that of BBC News; however, this may be due to the emphasis on multimedia. On Sky News the hyperlinks change colour when hovering with a cursor. In addition, Sky News has a feature that links to a person’s “profile”. If you click on the hyperlink of public figure featured on the site, an archive of articles, news reports, feature articles and galleries by Sky reporters are available.

Content/User Generated Content
Both websites feature similar categories of news posts. They are divided under the headings of UK and world news, however, BBC News further divides posts into the constituent countries whereas Sky News places more emphasis on showbiz articles. In terms of user generated content (UGC), Sky News appears to feature more interaction with users of the site. Comments can be posted on every article and readers can suggest articles of interest. On the homepage, there are also links to categories labelled “Your Videos” and “Your Photos” in which readers can upload photos that relate to articles featured on the site. In contrast, BBC News does not have a commenting feature on most articles. Quite interestingly, much of the UGC on BBC News is through use of social media.

“[Social media] is about how we can use all technologies effectively to reach out and connect with other humans” (Safko, 2010, p.3)

The BBC have a twitter site, (@BBC_HaveYourSay) in which tweets and emails are transferred onto the BBC News site’s articles, this feature can be found from BBC News website, although interestingly, they do not feature their own twitter feed on their homepage, something which is heavily used by Sky News. Additionally, Sky News features other twitter feeds on the homepage that are relevant to the news of that day. 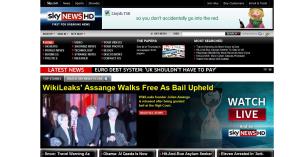 Multimedia
There is great emphasis on images and video on both websites.  On each article, there tends to be at least one image which corresponds to the story in question. If users of Sky register, they get the option to “watch Sky News live”, with live streaming from their television station. Sky News also emphasises use of audio. There is a “Sky News Extra” feature in which visitors can listen to live streaming of Sky news. BBC News has a similar function which links to the “iplayer” radio section of the BBC website. Both websites have easy access links to download podcasts and a search bar is available if a particular podcast is desired. Sky News also features the new popular “Audioboo” podcasts.

Social Networking
Social networking is commonly used alongside web journalism in order to generate traffic to websites. Both BBC News and Sky News have a “sharing posts” feature enabled in which  all articles are available to be linked to social networking sites such as ‘Twitter’ and ‘Facebook’ and articles can be suggested to those with similar interests. Furthermore, within the Sky News website, any registered user can start their own blog and create their own profile of writing online, networking with others who have the same interests. This also shares the sense of citizen journalism, although untrained contributors will not appear on the homepage, their profiles can be found through searches.

Conclusion
It is clear that both websites are extremely successful due to their up to date content and use of social media networking. Arguably, BBC News could use a similar commenting feature as seen on the Sky News website as, after a simple registration process, users can comment on any feature they want. But as the BBC News website is reputable for content anyway, it may not be seen as necessary to those running the site. With regards to the Sky News website, I think that it perhaps places a little too much emphasis on multimedia, as the amount of images and videos can be slightly overbearing and can divert attention away from the content of articles; however the multimedia used is always of a high quality. Although, overall it is clear that both websites meet their purposes and are successful in their own right.